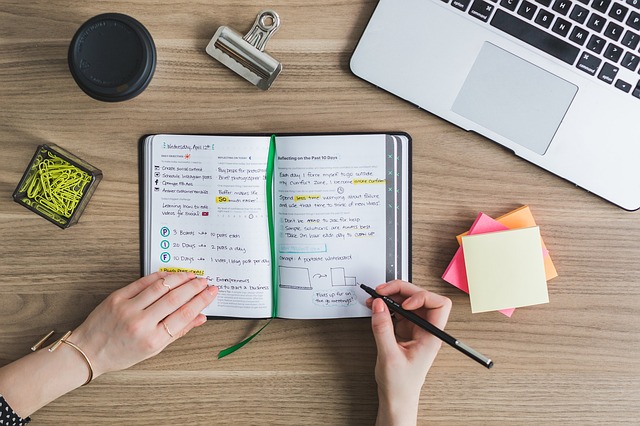 Full disclosure: I have successfully crowdfunded books on Kickstarter and IndieGoGo, so I prefer those platforms over others. I’ll go over the reasons why below.

Regardless of what you decide, you first need to research the types of projects featured on each platform to find the best “home” for your book.

The average book campaign raises around $5K. If you have a larger goal in mind, I suggest you read about how Don Moyer used serial campaigns to successfully fund his creative projects.

Let's Start With The Basics

A key thing to remember: the vast majority of your readers don’t understand the concept of crowdfunding. Plain and simple.

Whenever you launch a crowdfunding campaign for your book, most of your time will be spent educating your Aunt Mary why you are crowdfunding your book and why it’s important that she shares your campaign link.

Without a doubt, she will brush you off thinking that you are begging for money, and you’ll be left feeling frustrated with the entire thing.

So, given that, does the platform you choose matter?

Crowdfunding companies like Kickstarter and IndieGoGo are homes to crowdfunding campaigns that have gone viral—gadgets, gizmos, and a never-ending supply of travel neck pillows.

However, creative projects like performing arts and books have struggled to find the same success as the games and apps have on these platforms.

The average book on Kickstarter and IndieGoGo receives $5k in funding. However, there have been notable exceptions, and I’ve seen books reach over $100k.

Science Wide Open put out a series of science books for girls and leveraged their established audience from their online games to find success on Kickstarter. Their campaign ended with $136,520 (2275%).

It doesn’t mean it can’t happen, but it’s rare. Those with wild success have already built their audiences before they launch.

Publishizer was invented in 2016 with books in mind and I really really wanted them to be the answer and provide an amazing platform for books.

It might because they are still growing as a company, but in browsing their current and past book proposals, I simply cannot recommend them to any of my crowdfunding clients.

Publishizer is kind of like a literary agent who takes 30% after you’ve used their platform to drum up 1,000 pre-orders of your book.

The thing is, if you can successfully garner 1,000 pre-orders for your book, you don’t need the Publishizer platform, and you certainly don’t need to give them 30% of your funds raised.

Because if you are popular on Kickstarter or IndieGoGo, you can use that social proof to get the attention of a traditional publisher. I know because it has happened to one of my clients on IndieGoGo, but they never paid someone 30% for that visibility—only the 8% in IndieGoGo and payment processing fees.

So, why automatically give a platform money for what you can do yourself?

The benefits of a community

Kickstarter has some benefits—there is a vast Kickstarter community of super backers who browse the platform and offer up their support to random projects. Since Kickstarter backers aren’t charged until the project is successful, many backers will support a project in the early stages when things are relatively low-risk for them. It’s been known to happen.

The publishing projects on IndieGoGo tends to be fertile ground for books, and they will often share popular campaigns on their Facebook and Twitter social media accounts resulting in a huge boost in your visibility to new readers.

The main problem I have with Publishizer, and I have a few, is that they will put you in front of the Big 5 publishers if you have 1,000 pre-orders, but their most successful books usually only raise $1,000-$5,000 in funds—the same average as Kickstarter and IndieGoGo.

So, in short, their fees are higher, the projects on the platform tend not to compete as well as those on Kickstarter and IndieGoGo, and the community is smaller than the other crowdfunding platforms.

My personal opinion is that the Publishizer website isn’t as visually appealing as Kickstarter or IndieGoGo.

Publishizer also has a bit of a “Chicken or the egg?” dilemma. Meaning that the authors who are posting on the platform are seeking funding because they don’t have an audience but you can’t successfully crowdfund ANY book without an audience.

While I absolutely love the concept of Publishizer because they are focused on books, they missed a huge part of the equation essential to all crowdfunding campaigns and book campaigns are no different than neck pillows.

You need to offer something someone wants.

Often, the authors on Publishizer aren’t offering books anyone wants and therefore, their campaigns flop. Without a funding do-or-die strategy like Kickstarter and IndieGoGo, authors aren’t motivated to push their campaigns to success.

Authors use Publishizer because they want to get the attention of a publisher—indie, hybrid, or traditional. That means that they aren’t really committed to putting out the book on their own and readers don’t want to back a book that’s unlikely to happen.

Consider the perspective of your reader (aka the backer)

Let’s look at it from the reader’s perspective. Am I more likely to pre-order a book from an author who is waiting for a publisher over one who is committed to self-publishing and delivering the book to me according to a specific timeline?

I can tell you right now, readers who are truly interested in the book and want you to be a success are going to want reassurances that you’re going to deliver the book.

The uncertainty factor that is inherent in Publishizer’s approach doesn’t send waves of confidence to the author or the reader. It’s a big shoulder shrug as to the outcome of the campaign.

Homework: After you’re done with this article, head over to all of the platforms and comb through their current book projects, and you tell me which is your favorite.

If you have one (only 1) pre-order on Publishizer, you’ll be put on the list of service publishers—the folks who will gladly take your money to help you “self-publish” without any quality control or guidance.

No, thanks, Publishizer. I don’t want Xlibris to have my email whatsoever as they are notorious for horrible service and hundreds of writers have written reviews warning others about their “services”. The fact that Xlibris is even included on Publishizer’s website indicates that they have not done quality control for their authors.

Uh…if you’re not familiar with Xlibris or Authorhouse, proceed cautiously and read this article.

With Publishizer, your book won’t be seen by traditional publishers (the big guns we all hope for) if you don’t have 500+ pre-orders.

For Knocked Up Abroad Again, me and my contributors worked around the clock for 30 days to generate the equivalent of 302 pre-orders from 277 backers and $10K on Kickstarter.

Had I launched my project on Publishizer instead, I would’ve gotten the attention of 10-15 independent and service publishers (no big guns, sadly), but I would’ve had to fork over the 30% fee to Publishizer which would leave me with less money to self-publish the work myself if a publishing contract fell through.

If I were in your shoes, I’d take my chances and save 22% of my fees by crowdfunding on Kickstarter and IndieGoGo.

You bring the audience to the platform

Remember, authors have to bring their readers to the crowdfunding platform, so it really doesn’t matter which platform you direct them to as long as it contains enticing information, is visually appealing, and will get done what you want to accomplish.

In my opinion, Kickstarter and IndieGoGo will give you a better chance at success over Publishizer.

Now, should you choose Kickstarter or IndieGoGo? That’s another question for another day.

If you’ve created or backed a project on Publishizer and have a different experience, please let me know. I’m open and receptive to other people’s opinions. 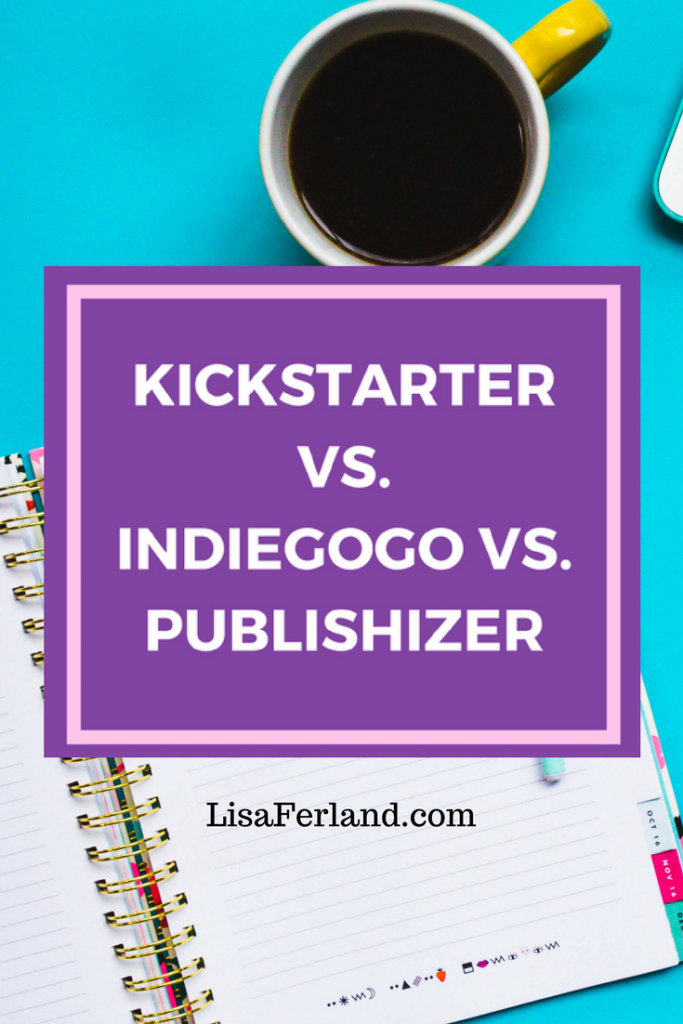 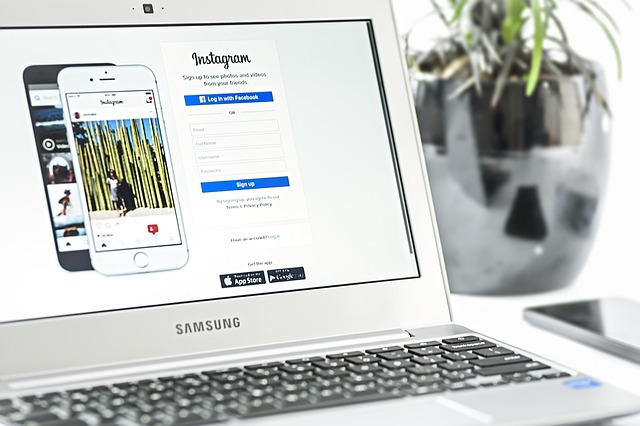 Your writing lives on your computer but your fans, followers, and potential readers live on their phones.

Sharing snippets of your writing with your followers in Instagram is a great way to build a loyal readership.

There are some new apps designed for writers to share their work visually and since they are on your phone, it’s much easier to create an Instagrammable image of your latest blog, poem, or chapter.

These apps are designed with the poet in mind, but you can use them to highlight attention to anything you’d like your readers to know about.

More and more readers are surfing on their phones every day and let’s face it, people respond to visuals.

Creating an image is a great way to get more attention to your text.

I tested out two mobile apps for you to consider enhancing your Instagram feed.

YourQuote is an app developed in India that has a huge writing community behind it.

The wallpapers are beautiful and you can add them as the backdrop behind your text to enhance the emotions or imagery behind your words. 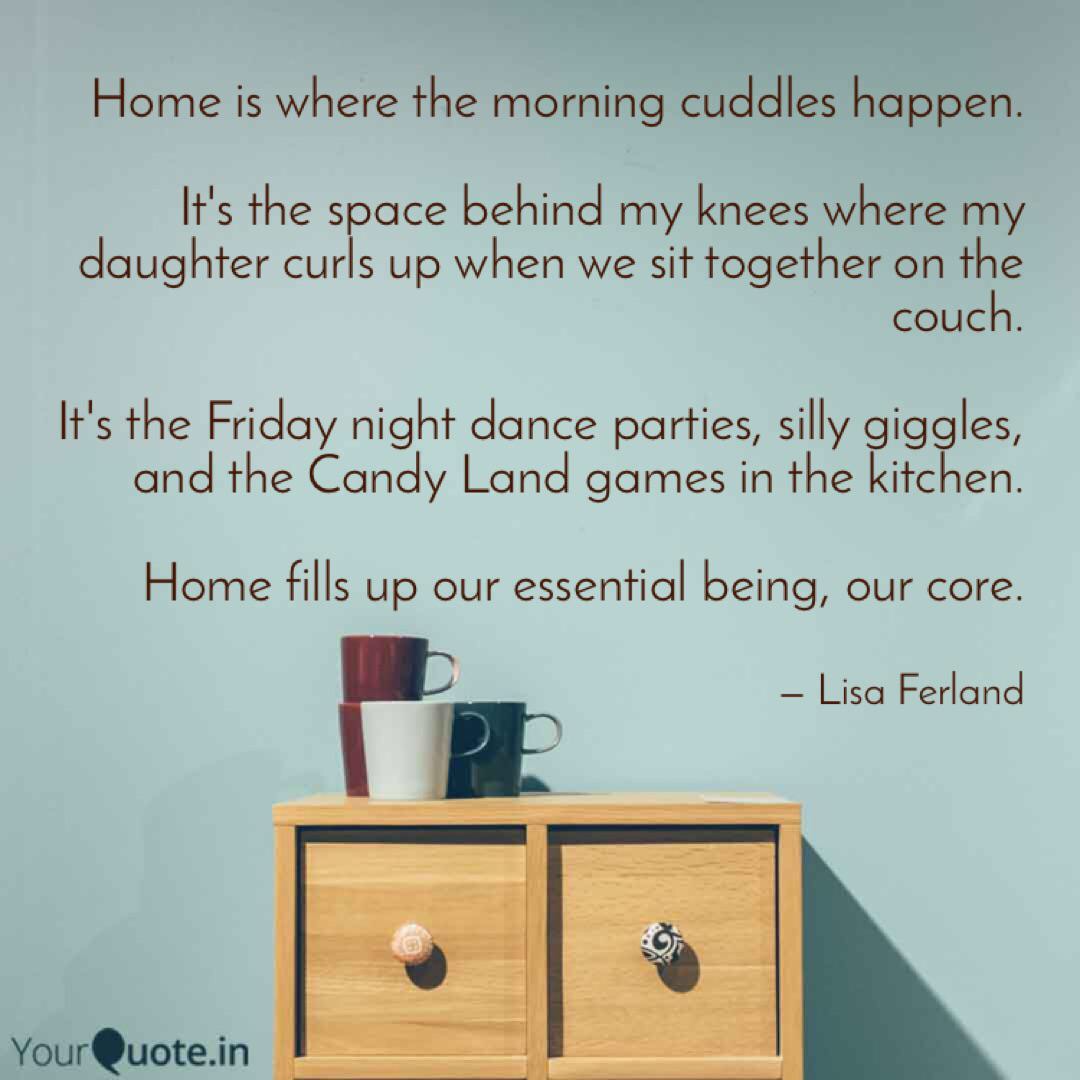 The app is a little buggy—it would suddenly close on me or freeze in the middle of my typing—but there are daily writing prompts to spark your creativity.

There is also an option to copy your caption so you can easily copy/paste over somewhere else.

-This rating is due to the app’s instability. It keeps crashing my phone despite having the latest update.

Mirakee is another app with a writing community behind it. The Explore feed looks like an Instagram feed full of poetry. The tap to heart options makes it easy to share encouragement to other writers and to find a little inspiration if you’re in a rut. 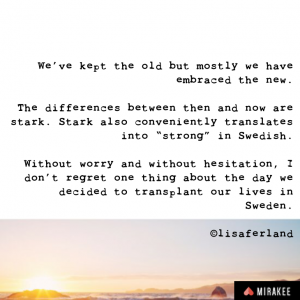 The compose and edit features are similar to YourQuote and navigating the app is easy.

So far, it hasn’t crashed my phone on me, so this less buggy version earns a…

Both apps are great options for sharing your writing on Instagram or Facebook and bringing more attention and visibility to your writing.

What’s great about the apps are the writing communities behind them.

The writing communities are a great way to feel connected to other writers instead of home alone writing at your desk surrounded by sheafs of paper and empty cups of coffee.

While Canva is not a writing app, you can use this photo editing app to create your own images and overlay the text manually.

Canva has great free templates with suggested fonts and styling straight from the box.

Unlike YourQuote and Mirakee, there is no Canva watermark attached with the images you create using the app. 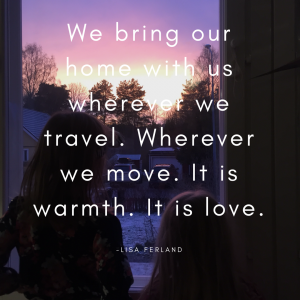 The app is seamless and has a desktop version as well, so you can access your images from your Canva account wherever you want to write.

You can upload your own images as the wallpaper which means that nobody will have the same background as you. Your imagery and text will truly stand out from the crowd.

-Canva requires a bit more manipulation but has greater control.

-With more options comes more decisions but I love the ability to upload your own images as the background wallpaper.

What hashtags to use?

There are a million hashtags on Instagram but the ones I frequently use are:

#tellyourstory2018 (my hashtag–use this and I’ll support you with likes and reshares.)

I discuss defining and connecting with your ideal readers in the first section of my Beginner’s Guide to Self-Publishing course because it is so important to know where to find your readers.
It is crucial to get them excited about your book before it is published.

Instagram is a great platform for sharing your writing if you create visuals that connect and inspire your audience.

Learn more about my step-by-step guide for self-publishing your story this year here. 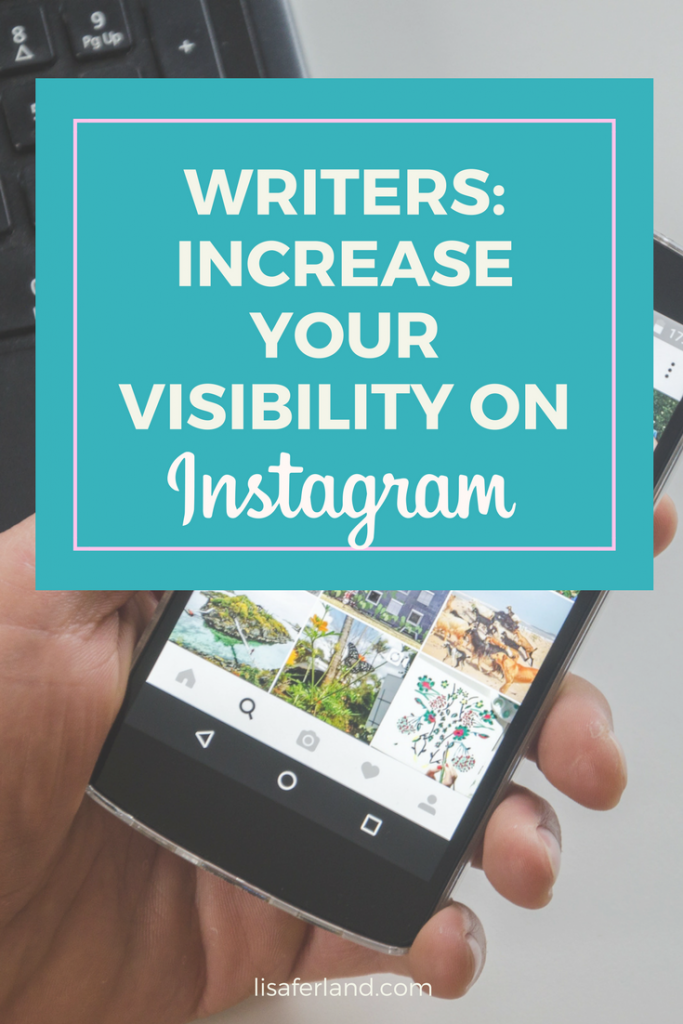