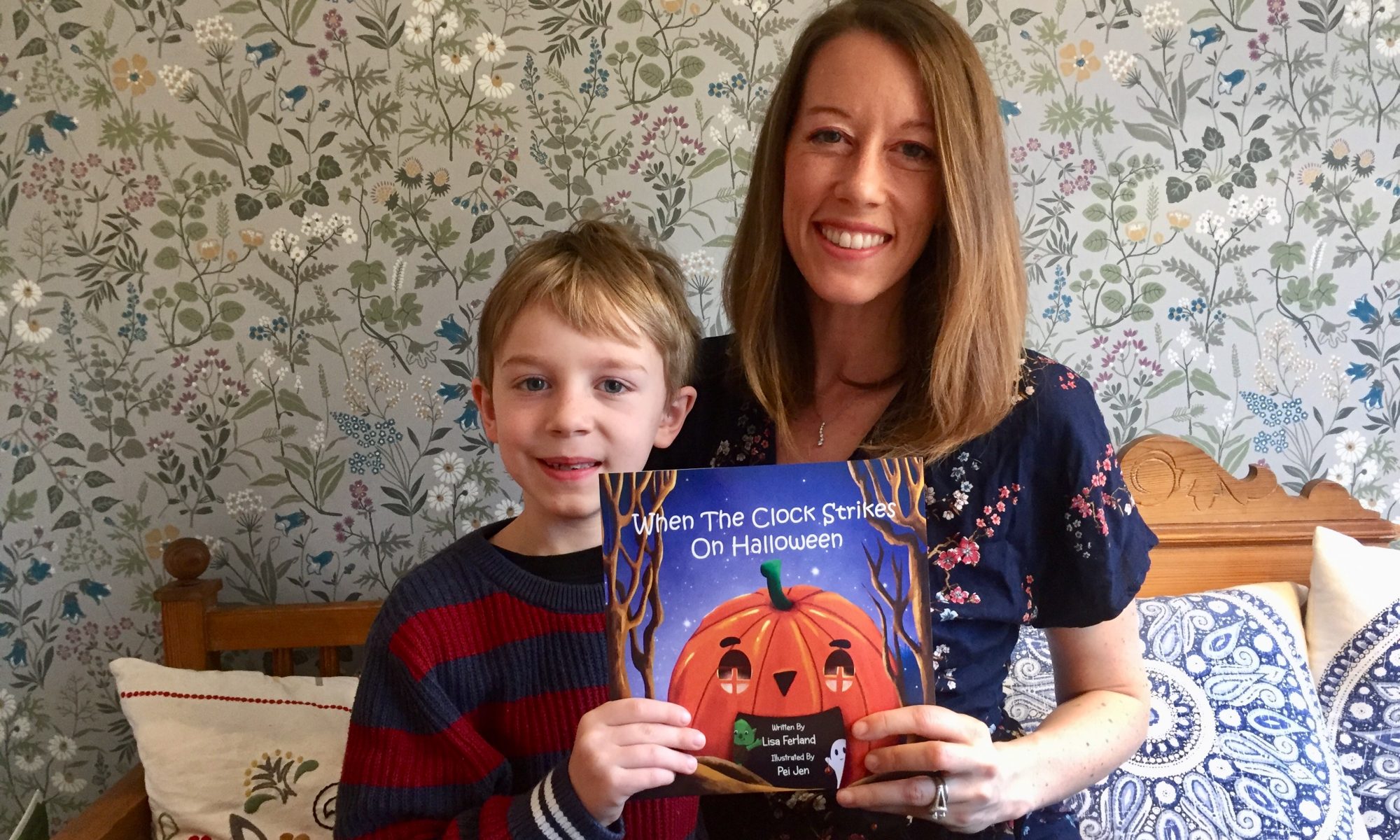 The story behind how When the Clock Strikes on Halloween came about. You can grab your copy here.

It was a dark and stormy Halloween night…actually, it was.

October in Sweden is really dark, and it wasn’t nighttime per se, but rather 3 pm which is quite night-like in terms of daylight.

The kids and I were at the dentist’s office for my daughter’s wellness check-up. She opened her mouth wide, and we discovered she had one cavity.

Given that it was Halloween and the kids were about to eat more candy than usual, we had a brief discussion about sweets and tooth brushing while on our way to the car.

As we walked through the parking lot, my son asked me, “Why does everything spooky on Halloween happen ‘when the clock strikes twelve?’”

I don’t know where this thought came from—my kids usually throw bizarre questions and ideas at me—but this one started a conversation between us.

“I don’t know. Maybe something happens every hour on Halloween. When the clock strikes one, mummies come undone…” I said in a spooky voice.

And so it went, on and on until we had a few rhymes.

The kids climbed into the car, and it dawned on me that I needed to write these rhymes down before they disappeared and became a hazy memory of “that fun conversation we had on Halloween.”

I’ve lost so many good ideas by thinking that I’d remember them later only to have no idea what we talked about.

The kids buckled in, and it was after 10 minutes of frantic scribbling in my notebook later that I remembered they were back there.

The backseat was getting complainy.

“Guys, Mama’s busy writing something. Hang on one more minute, ok? Then we can go.”

It wasn’t one more minute.

I had a problem

Nothing rhymed with twelve. Nothing.

Also, seven and eleven were tricky unless I wanted to rhyme them with one another, which I didn’t.

I left those rhymes as blank spaces and vowed to revisit them later.

Being the obsessed-with-a-new-idea type person, I had to validate my idea and see if it was any good. I created some Instagrammable images with clip art, added the text, and published them on my account.

It was Halloween evening…I didn’t have much time left in the day to be timely.

The hearts and comments started to pour in.

The initial reader feedback was good enough for me to take it to the next level.

I shared the images in a children’s book writer’s Facebook group and asked for more feedback—this time from my peers.

“I think you just wrote your first board book,” came some encouragement from Sheri Wall, “it’s really fun!”

It was vital for me to test the quality of the story before moving to the illustration phase. Illustrations can hide a bad story well—they are really good at that.

I wanted my contribution—the nucleus, the purpose of the story—to be solid before hiring an illustrator.

I hired an editor, Tamara Rittershaus, who told me that my meter was a mess.

What meter did I even want anyway?

My story was a jumbled mix of iambic trimeter, tetrameter, and pentameter. Did I want anapestic?

I had no idea what Tamara was talking about, and, feeling like I didn’t know English as well as I thought I did, I set off to Google and YouTube different types of meter.

After a lot of thinking and reflection, I settled on iambic trimeter. That had the best rhythm and was the simplest for the age range. Also, most of my verses were already in iambic trimeter, so I wanted to keep it easy.

My next two books can expand in length and complexity, but the beauty of this story was its simplicity.

Making it more than just a cute story

Cute stories are great but I know that teachers love books with a teachable element to them.

My books dealt with time, and my son was struggling to understand the concept of time in first grade.

A friend suggested placing a large analog clock opposite each illustration to introduce young kids to the concept of time.

The story could hold water on its own and now I had a teachable aspect of the book.

Parents and teachers would appreciate it for more than just a cute story and kids would learn something new while reading it.

I sent an advanced copy of my book to a few kindergarten and first grade teachers.

“Oh, it definitely works! I was surprised at how much my kids didn’t know about time until we started the questions at the end of the book. We had a good class discussion about the differences between morning, afternoon, and evening. I’ll be reading this to my class during the Halloween season.”

And with that, a book was born…

Luckily, my illustrator Pei Jen understood the vision I had for the book and elevated it beyond what I could imagine with her creativity.

The final illustrations are so much fun and the kids love looking for the little clues on every page.

Be sure to order your copy of When the Clock Strikes on Halloween TODAY because the special rewards are expiring soon and only available to supporters of the Kickstarter campaign.

So, hop on your broomstick and place your order for a copy (or two) today. 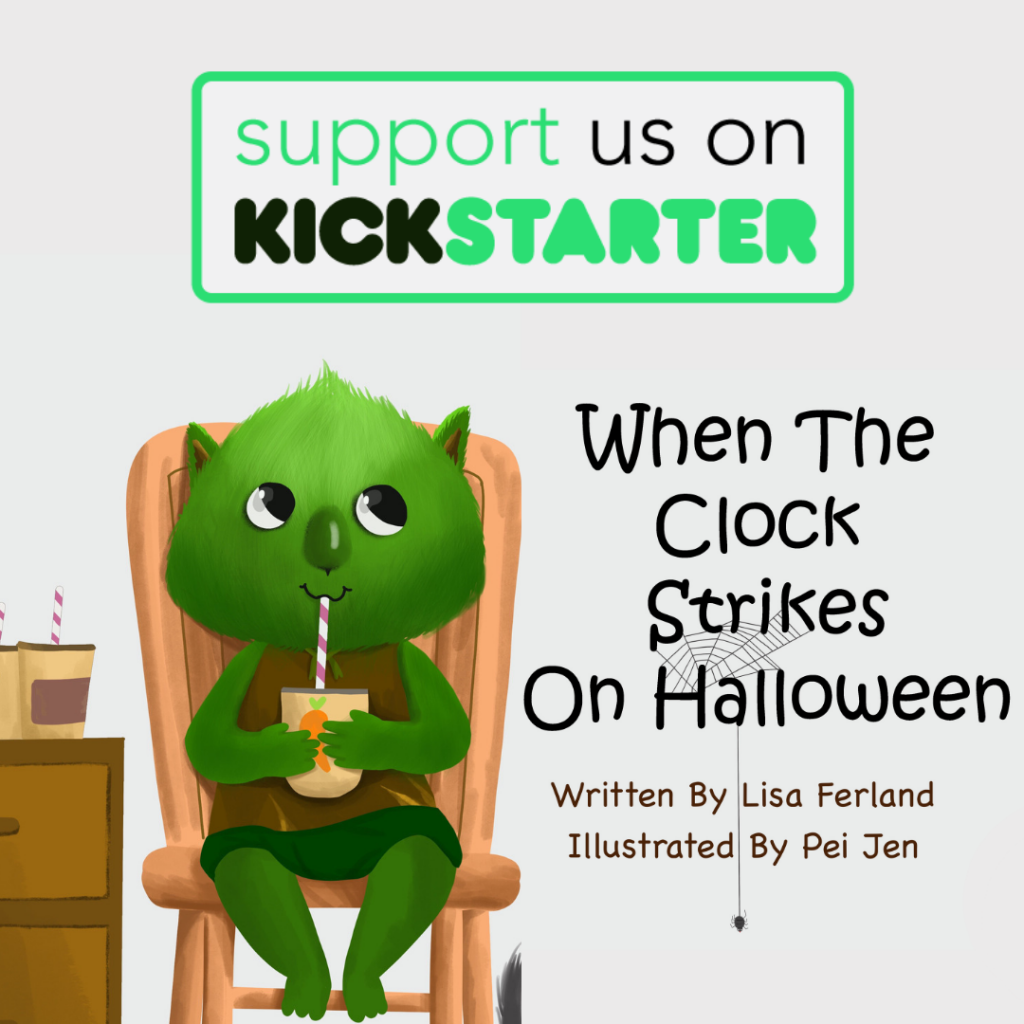