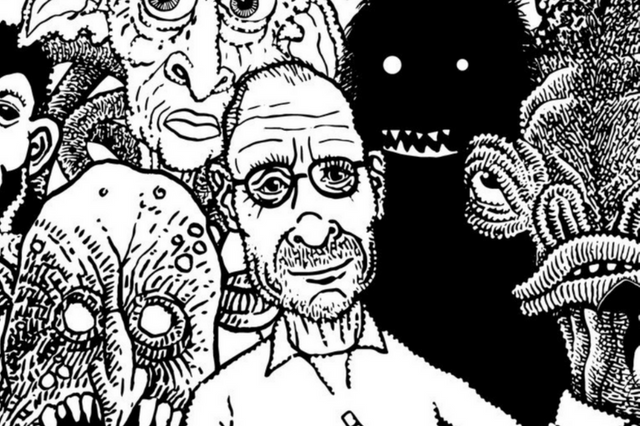 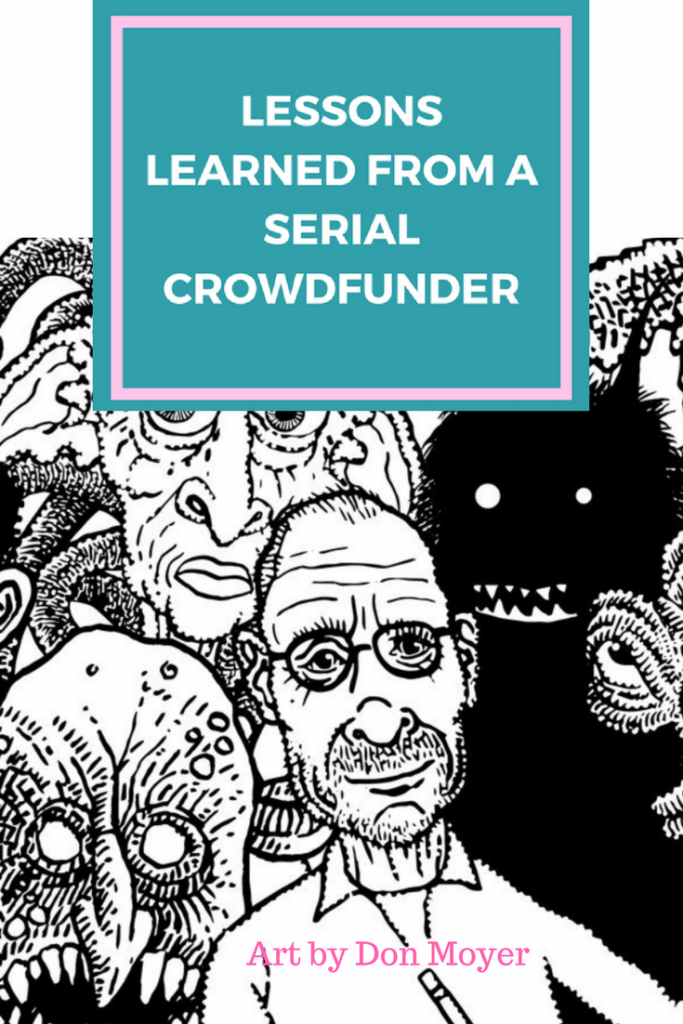 If you are interested in using crowdfunding to fund your book, then you would do well by studying Don Moyer’s success on Kickstarter.

Don is a serial creator with 32 projects on Kickstarter (probably more if you are reading this a few months after publication.)

Not only does he successfully crowdfund books on Kickstarter but he also creates unique ceramic pieces that he sells on calamityware.com.

After browsing through only a few of his projects, you’ll find that he is consistent, his style is distinct, and his work is high-quality. You’ll need those qualities as well if you want to replicate his success.

How I Discovered Don’s Work

Kickstarter has a great social feature that allows backers to follow one another. Every time someone backs a project, a notification email is sent out to all of their followers alerting them to the new project. This is a great benefit to Kickstarter and generates a community built on common interests and trust.

However, none of my friend’s had backed Don’s latest project—I actually saw his campaign shared on Facebook.

I watched the 1-minute video and was immediately charmed by the campaign’s goal.

Don’s content was authentic, the video was on point, and everything resonated with me as a reader. Home run.

Don Moyer delivers a hilarious, snappy, and succinct 1-minute pitch in his campaign video about why it’s much better to stay home than suit up and explore the stars.

Coupled with his unique illustrations featuring aliens and his robot and alien themed porcelain creations at Calamityware.com, the reader can easily find a lot to pair with this fun book.

Don kept it really simple by focusing on the book with the highest level reward being $100 for original artwork plus four signed copies of the book.

One signed copy of the book was $13—$2 less than retail price.

Two signed copies of the book—$22

Four signed copies of the book—$42

Let’s take a look at the one email I received from Don during the campaign. Note how his message is in keeping with his personality and the book’s tone which keeps things light, entertaining, and informative.

I’m so happy you’re supporting Stay Home, my latest Kickstarter project. These books tell the truth about the perils and inconveniences of space travel and may make you laugh.

If you know anyone who needs encouragement to stay home, be sure to tell them about this project before it closes tonight, November 22.

Watch for my updates as the project advances. I’ll try to keep you up to date without being an email pest. The latest update is here.
https://www.kickstarter.com/projects/159974695/stay-home-book-reveals-the-ugly-truth-about-space/posts/2043134

Thanks for your amazing support.

****
PPS: Left-overs from my previous Kickstarter projects are available at www.calamityware.com, while supplies last. A great place to find some unusual gifts, including the world’s most delightful shower curtain.”

Don’s humorous personality is really what makes his video fun to watch but then his call to action in his email reinforced my desire to share.

Don is back at it with another Kickstarter project that currently has reached $70k as of this writing and has two more weeks to go before it closes.

How does he do it?

Don is a Kickstarter veteran and has created 32 projects. Not only is he a super creator but he is also a super backer.

If you are going to venture into the world of crowdfunding, you need to understand that becoming a backer of other people’s projects is vitally important. 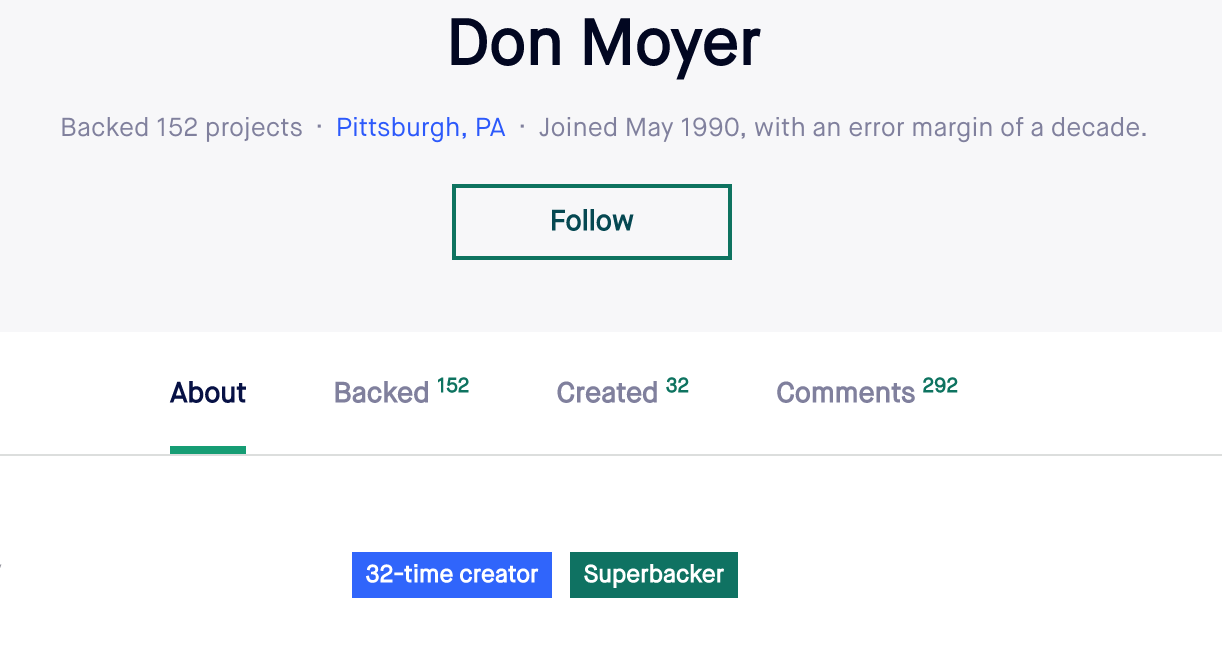 Check out Don’s stats: he has backed 152 projects, created 32, and commented 292 times on Kickstarter.

He’s an active member of the Kickstarter community in both creating and supporting other creators.

“I’m always deeply suspicious of people who launch a project when they have never supported even one. Ridiculous.”

You heard it directly from the pro, folks, go back a few campaigns before you launch your project.

Serial backers who support random campaigns on the platform look at creator’s profiles to assess reliability.

You don’t have to create 32 projects like Don, but you will need to support at least one project before you launch your own.

What happens when you support other people’s crowdfunding projects

You will learn a lot when you support other people’s crowdfunding projects. I have had many email communications with fellow backers and they were fonts of knowledge and tips.

After backing someone’s project, email them with a simple request to chat if they have a moment. Ask them if they can share any lessons learned with you or give you any advice. You’ll learn so much from them and who knows? Maybe, just maybe, they’ll support you when you launch your campaign.

Back to Don’s success…

How can we find success on Kickstarter?

No doubt, Don’s past projects have garnered quite the devoted following. But look at his funding targets—they are insanely reasonable.

Across his 32 projects, his funding goals range from $2500-$5000 and he exceeds them by tens of thousands of dollars.

Setting a low funding target does a few things: 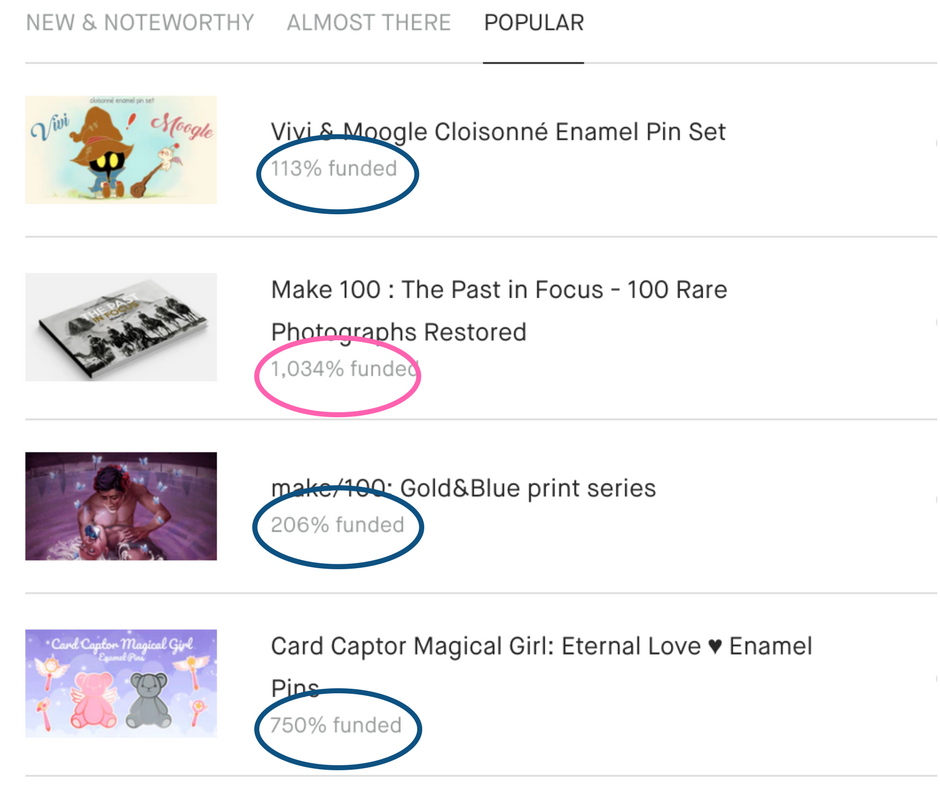 As a backer, I’m going to check out the one that’s 1,034% funded first because that one is clearly the most popular and I want to find out why.

Don is consistent in delivering high-quality products that are unique, interesting, and best of all, downright fun.

His messaging is consistent throughout everything he does—his campaign page, reward descriptions, communication with backers, and his public updates.

Even better was his book, you know, the thing I wanted from the beginning, had the same style and voice as his campaign.

Anyone who can insert humor into the copyright page is someone I want to continue to support.

Don used Fulfillrite based in NJ, USA—a third-party service to fulfill his orders—and everything was seamless. I completed a quick survey and my book arrived in the mail a few weeks later (most likely due to my international address).

What can you learn from Don’s success?

Be yourself. Be quirky. Be weird.

Put out high-quality stuff, set small goals, fulfill your projects consistently, and be yourself in all of your communications with your backers.

If you have a project with a big funding goal, think about what you can do to break it down into pieces.

Don has amassed a huge collection of porcelain creations that are part of his Calamity Ware store, but he didn’t get there by asking for $100k in funding.

He raised funds for each mug, plate, platter, and book, and delivered them one at a time building success upon past success.

Engage in the community

Back other projects, communicate with fellow backers, and comment regularly so you build a presence.

You’ll get the same advice from the Facebook, Instagram, and Twitter social media wizards—you have to be a genuine part of the community to benefit from it.

Don has successfully created a store full of related items and once he figured out the format that connected with his audience, he repeated the process time and time again.

Do loads of research before you start and evaluate what works and what doesn’t work from other creators.

Feel free to send me an email for a free 20-minute chat where we can figure out what works best for you.

Send me an email